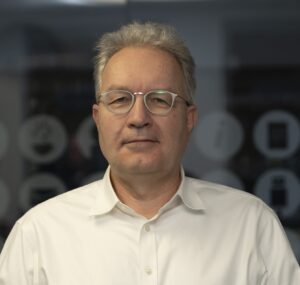 Since July 2017 Erik Huizer is the CEO for GÉANT, Europe's leading collaboration on e-infrastructure and services for research and education. Before that he was CTO at SURFnet, the Dutch national academic and research network.

From 2008 - 2012 Erik Huizer was Managing Director (Algemeen Directeur) for the Information Sciences and Space technology division at TNO (The Netherlands organization for applied scientific research).

From 1988 - 2000 Erik also worked at SURFnet and he chaired various RARE (later Terena) WGs. He was a member of the Terena technical committee. From 2000 - 2015 he was a part time Professor Internet Applications. Most recently at Utrecht University and before that at the faculty of computer science of the University Twente. He remains a research associate at Utrecht University.

Erik chaired the Dutch IPv6 Taskforce from 2002-2017. The taskforce created awareness, build technical capacity and helped ISPs, SMEs and the government to introduce IPv6 in the Netherlands.

For his contributions to the Internet he has been inducted into the Internet Hall of Fame in 2014. In 2015 he was honored with the title of Dutch ICT personality of the year. He has been teaching at various developing countries workshops on Internet policy and technology. He is a TEDx speaker.